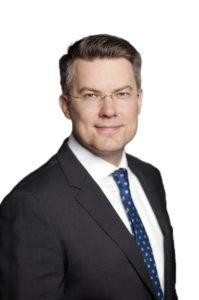 Mr. Toni Hemminki (born in 1975) has served as President and Chief Executive Officer of Fennovoima Oy since October 2014.

Prior to joining Fennovoima, Mr. Hemminki held various positions at SSAB (former Rautaruukki Oyj) during 2001 – 2014. During those years he expanded his experience from expert and research and product development positions to leading positions as VP, Energy and Environment in 2007 –2011; SVP, Technology, Energy and Environment in 2011 – 2013; Chief Strategy Officer in 2013 – 2014 and Deputy CTO and Head of Energy, Environment, Health and Safety from September 2014, on, until joining Fennovoima.