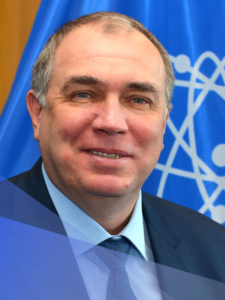 Mikhail Chudakov joined the IAEA as Deputy Director General and Head of the Department  of Nuclear Energy on 1 February 2015.

Until his appointment at the Agency, he has been serving as the Director of the Moscow  Centre of the World Association of Nuclear Operators (WANO) since February 2007.

From 1995 to 1999 he held a number of senior positions in Russia’s Rosenergoatom nuclear  utility. In April 1999, he was appointed Deputy Director General of Rosenergoatom and  Director of Bilibino NPP.