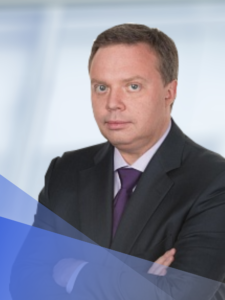 Kirill Komarov is First Deputy Director General for Corporate Development and International Business of ROSATOM. He entered this role in 2011 and has since been responsible for the oversight of the state corporation’s foreign business activities, international orders portfolio growth and ROSATOM’s global standing. Mr. Komarov joined ROSATOM in 2006, where he has been in a variety of leadership positions, including CEO of Atomenergoprom – a holding company unifying Russian civilian nuclear assets. He continues to also maintain this function in his current capacity.

Prior to joining ROSATOM, Mr. Komarov was Deputy Director of the Federal Water Resources Agency. He began his career at a Russian consulting company, followed by an investment conglomerate.

Mr. Komarov graduated from the Urals State Law Academy in Yekaterinburg, Russia. After completing a postgraduate course, he received an advanced law degree from the institution.